The Accent on Working Dogs at Bonalbo

It was a completely new event to all at the 2019 Accent Benchtops Working Dog Rally. A joint MTA NSW Rally Championship, Queensland Championship and East Coast Classic Rally Series event that saw 49 cars and crews take to the stages around the small northern NSW town of Bonalbo on a crisp July Saturday morning.

The battle for the MTA NSW Rally Championship in particular was rejoined, as championship leaders Richard Shimmon and co driver Jim Gleeson still had Victorian Glen Raymond and Kate Catford to wrestle. After their big crash three weeks ago in the pair’s Evo 9 at the Rally of the Bay, there was some doubt as to whether ‘Raymo’ would continue in the championship. However, due to the generosity of the Bergman family who own Raymo’s old Subaru Liberty/ Legacy, the quiet Victorian would soldier on, as well as Melinda Bergman running her own Lancer Evo 9 at the event as well.

There were others that would challenge for the win, Glenn Brinkman and Harvey Smith were back in their Lancer Evo 9, and Glenn was also the sponsor of the event. His company, Accent Benchtops is based in northern NSW, and they had brought a literal truckload of promo gear to the event.

Glenn wanted to do well, maybe even win, despite being car 1 on the road, and the disadvantage of having to sweep the road clean. And after a trouble-free run the pair were close, only missing out on the win by 11 seconds, and taking second outright. Glenn and Harvey both excited to complete a rally without problems.

Shimmon and Gleeson would take third outright after a quick and consistent run in Shimmon’s Lancer Evo 7. ‘We don’t go crazy on tyres’ explained Gleeson before the start. ‘This event will be new for everyone here, so we’re going to do what we do and see where we end up’. It has been a strategy that has worked all year for the pair and puts them in front of the championship still, headed to the last round in October at the Monaro Stages. 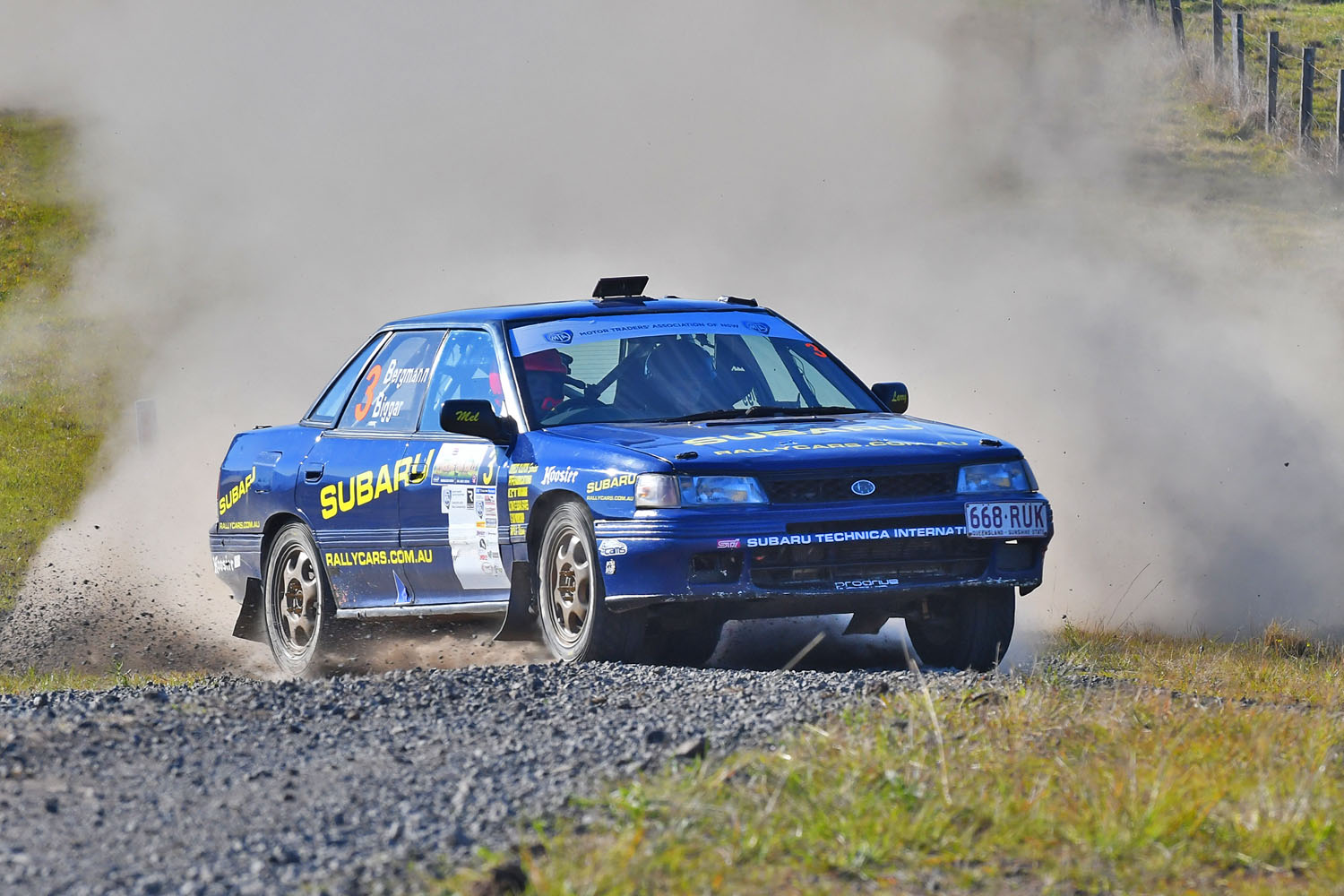 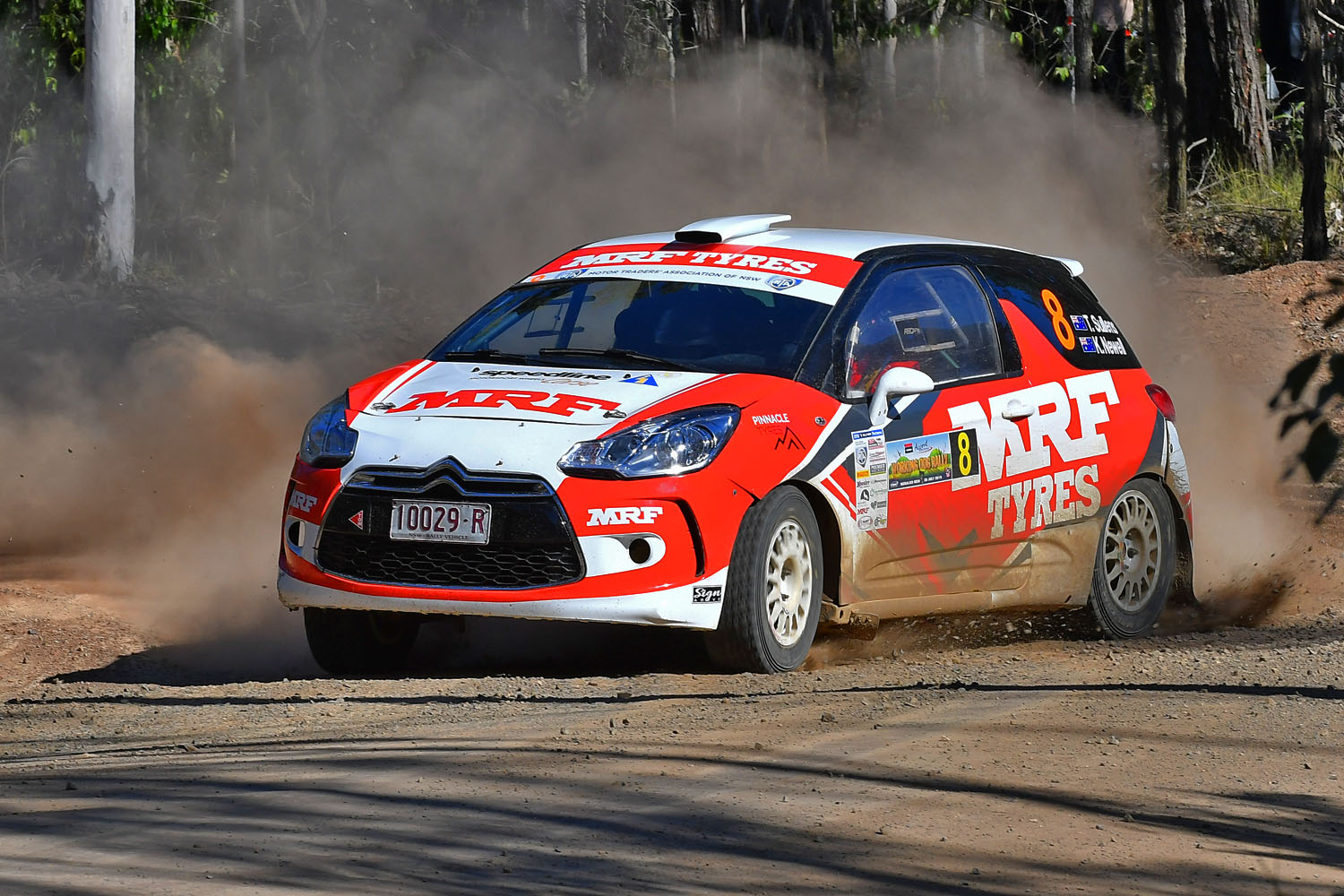 Tristan Kent had also had a trying time at the previous round, crashing heavily, however he had managed to get himself north to Bonalbo and had visions of keeping himself in the championship hunt. He had experienced co-driver Peter Hellwig with him this time around, however he had a feeling in the car that made it handle much like a rear drive. It made for great viewing, and the times were not bad for the Canberran, but he had to settle for fourth in the end in his bright orange Lancer Evo 9.

In a remarkable fifth outright and first 2WD was the Citroen DS3 of Tony Sullens and Kaylee Newell. If the Rally of the Bay had suited the crew and car then this event did too, and despite a mystery gearbox drama at the very start of stage 1, which did not reoccur, Tony put his head down and committed to the roads and the car and nailed down another giant-killing result.

Sixth is where we find Raymo and Kate Catford and the ‘ancient’ Subaru. Melinda Bergman reckoned she could now sell the car for an inflated price as the car had finished so well in the event! Raymond’s commitment was evident, and this result takes the championship to the final round.

Seventh after a mostly quiet day was the Evo 5 of Armidale’s Garry Yeomans and Kam Baker. The pair had a massive moment on stage 7. Kam explains. ‘The rears (tyres) just let go into a fast-left hander. I saw there was nothing on the inside as we were broadside and the car went to the inside.’ It was a very steep slope and Gary managed to turn the car to the right and fire the car back onto the road. ‘We were lucky there was nothing down there!’ said a relieved Kam. Garry’s cheeky grin said it all really!

Eighth was another northern NSW crew, this one being the Lancer Evo 4 of David Opie and Ben Richards. Seeded car 24, the pair set 4 top ten stage times to hit the top ten easily and beat some more fancied teams, and to be just behind the former driver of this very car, Garry Yeomans.
Ninth was the reward for the trip south for the Lancer Evo 9 crew of Brayden and Blake Wilson. The pair had a good run again after some learning experiences in their new car.

Tenth was also a Queensland crew, Cahal Carey and Ronnie Bustard, also in an Evo 9. But they were tied with one of the best sounding cars in the field, the S2000 Corolla of Wayne Morton and Kirra Penny, a Queensland based driver and NSW based co driving combination had to put up with some slippery roads in the normally aspirated Corolla and they played catchup for most of the afternoon. 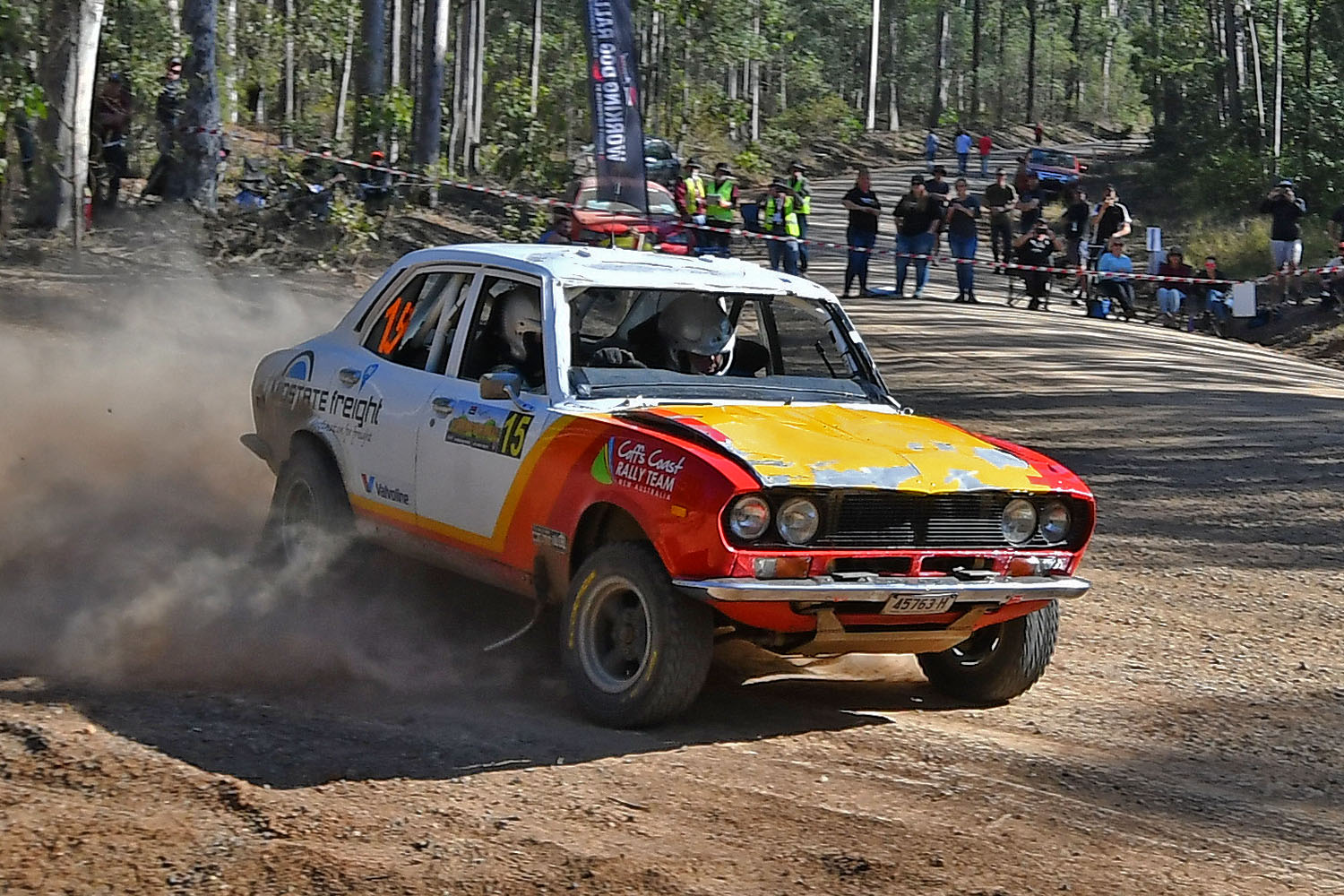 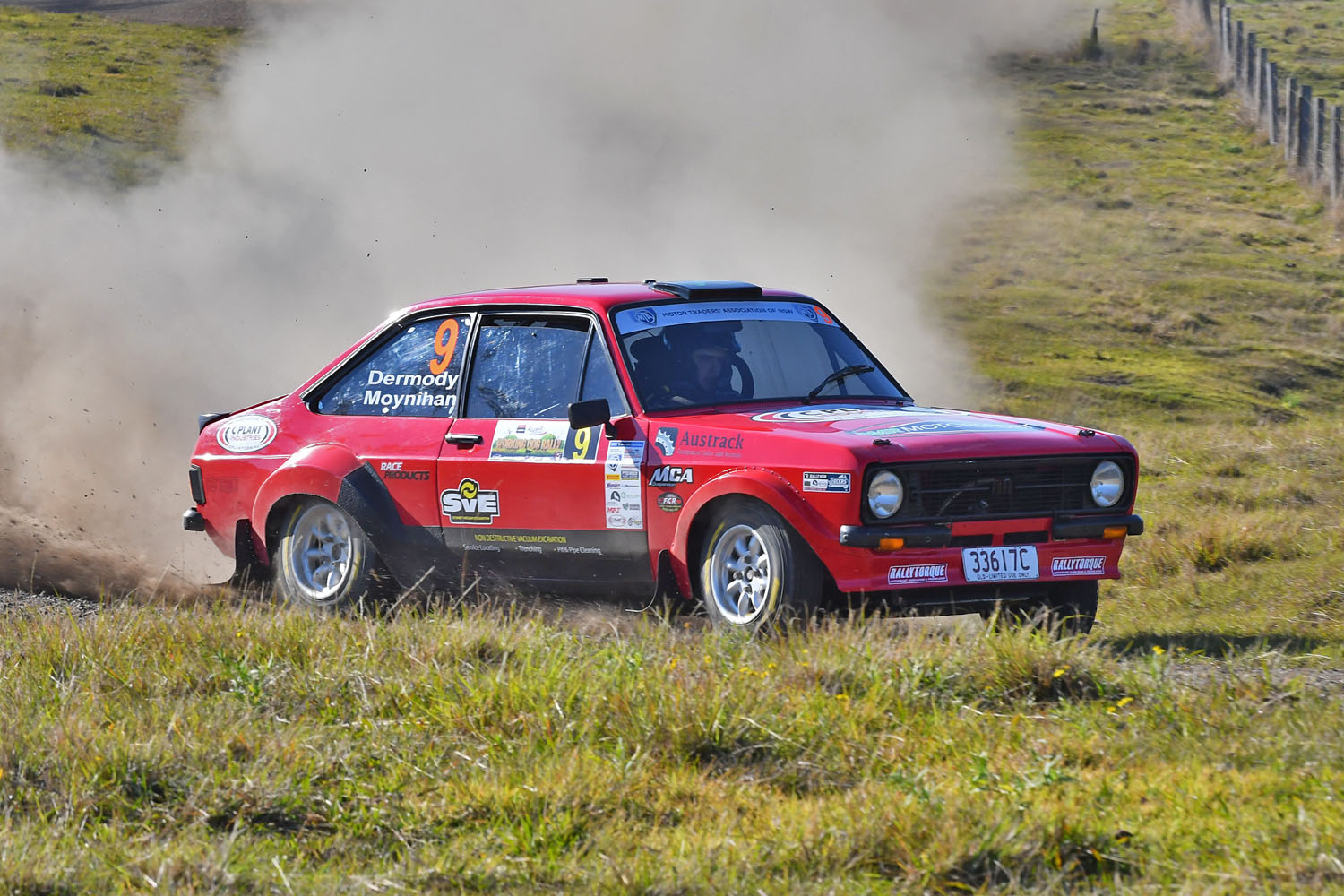 However, they were all chasing a man in his first NSW state round, Clayton Hoy. He had the very experienced Alan Stean with him, and Alan was not on his first state round! The ex-Peter Roberts Evo 6 sounded strong all day, and Clayton himself was surprised at the win. At the final control he was a little lost for words. A strong start had seen his lead stretch out to around 30 seconds at one point, but the northern NSW man had it in him to keep his lead despite the hanging dust on the late afternoon and evening stages and won the event by 11 seconds. A remarkable result from what is no doubt a remarkable talent.

Second 2WD, 12th outright and second Hoy home was proud dad Wayne. The 260Z was humming all day and Wayne and co drive Richard Galley showed the pair had no loss in speed. The green machine entertained all day with a great display of sideways motorsport, despite blowing a head gasket in the afternoon and feeding it water regularly between stages.

Let’s hope it isn’t too long until we see these two out again. The third 2WD home (and 15th outright) was Clay Badenoch and Catriona Kelly and Clay’s Celica RA40. Another top sounding 2WD car, Clay enjoying the new event. The team also took first in the East Coast Classic Rally Series component of the event. 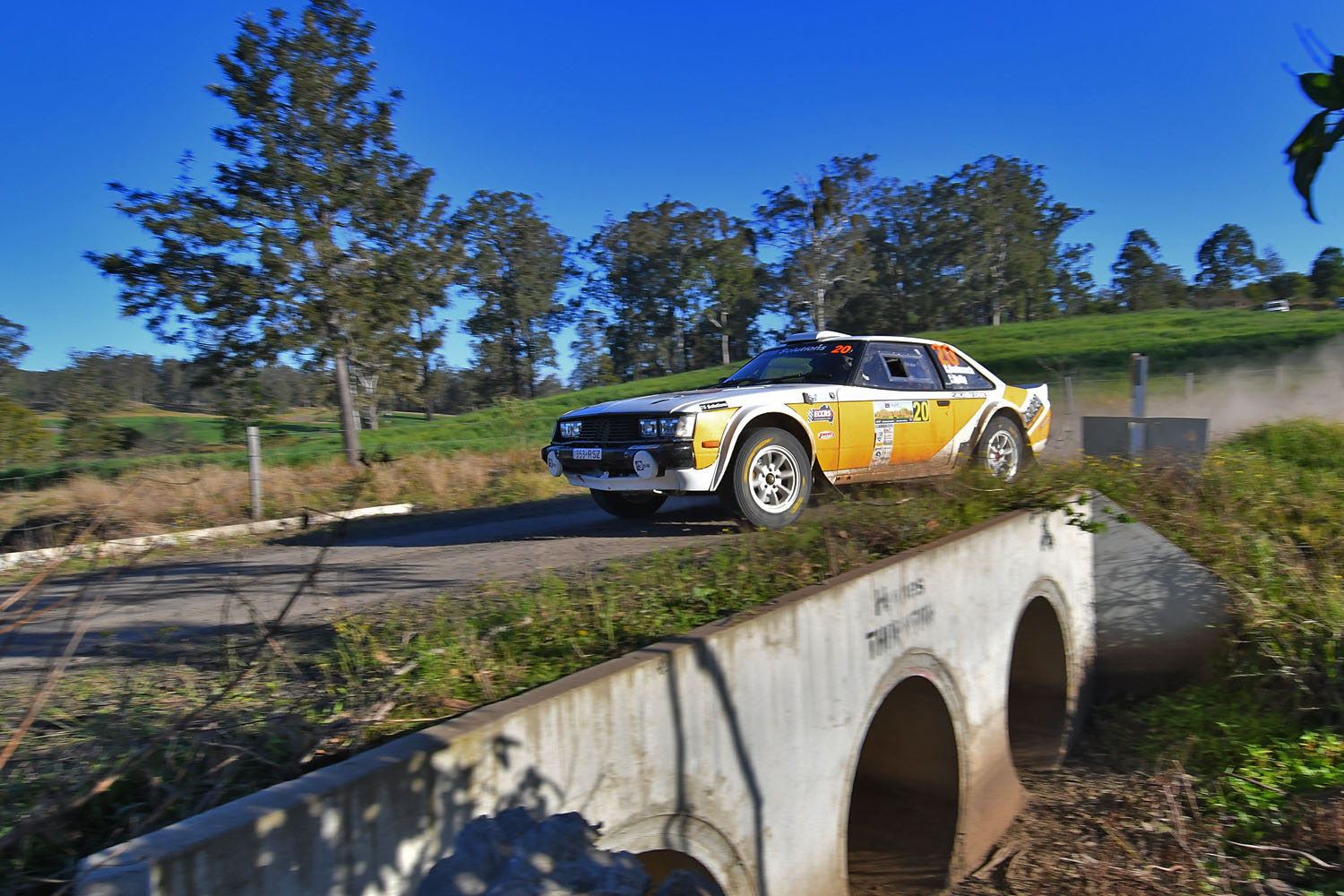 Some other notable runs came from Queenslander Ryan Smart and Hugh Reardon-Smith in the amazing Datsun Stanza. Setting top ten times in places, the pair were forced out of the event at the first service after a small engine issue surfaced.

Andrew Penny hauled his Subaru all the way from Jindabyne for the event and was up into 5th at one stage, but a wheel bearing failure would dash their good run and see them down in 13th with regular co driver Rhys Llewellyn.

Tom Dermody was back in his RS1800 Escort and hoping for a win in the East Coast Classic Series, but lost a wheel in stage 2. Dermody and co-driver Eion Moynihan chased back up to 23rd and set a string of top ten times to do this.

Nathan Quinn and Ray Winwood-Smith ran most of the event without a windscreen after the glue on the bonnet failed and the skin took the windscreen out – brave and cold would be an apt description of the rest of their day! Incredibly, they set the forth fastest time in the final stage, such is the commitment of this team.

The Accent Benchtops Working Dog Rally was a credit to the club who ran it, the Gold Coast Tweed Car Club, the many officials and volunteers, and the locals of Bonalbo and surrounds that made everyone feel so welcome.

The final and deciding round of the MTA NSW Rally Championship sees teams a lot closer to Andrew Penny’s home, the Monaro Stages. With almost 3 months before the event, it will be run out of Cooma with fast shire and forestry stages around Bombala on the 19th October. If the events before it in 2019 are any indication, it will be a great event. 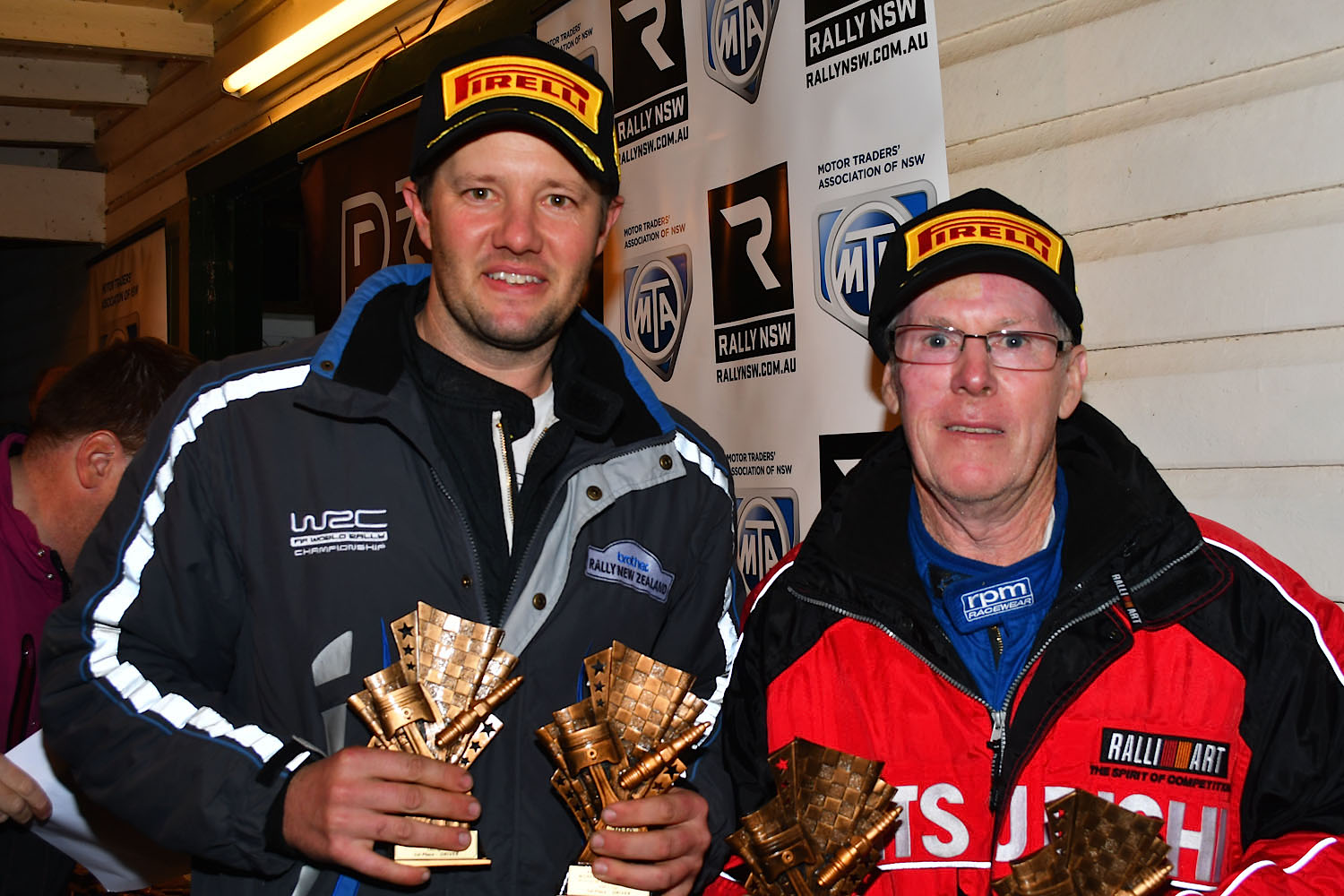 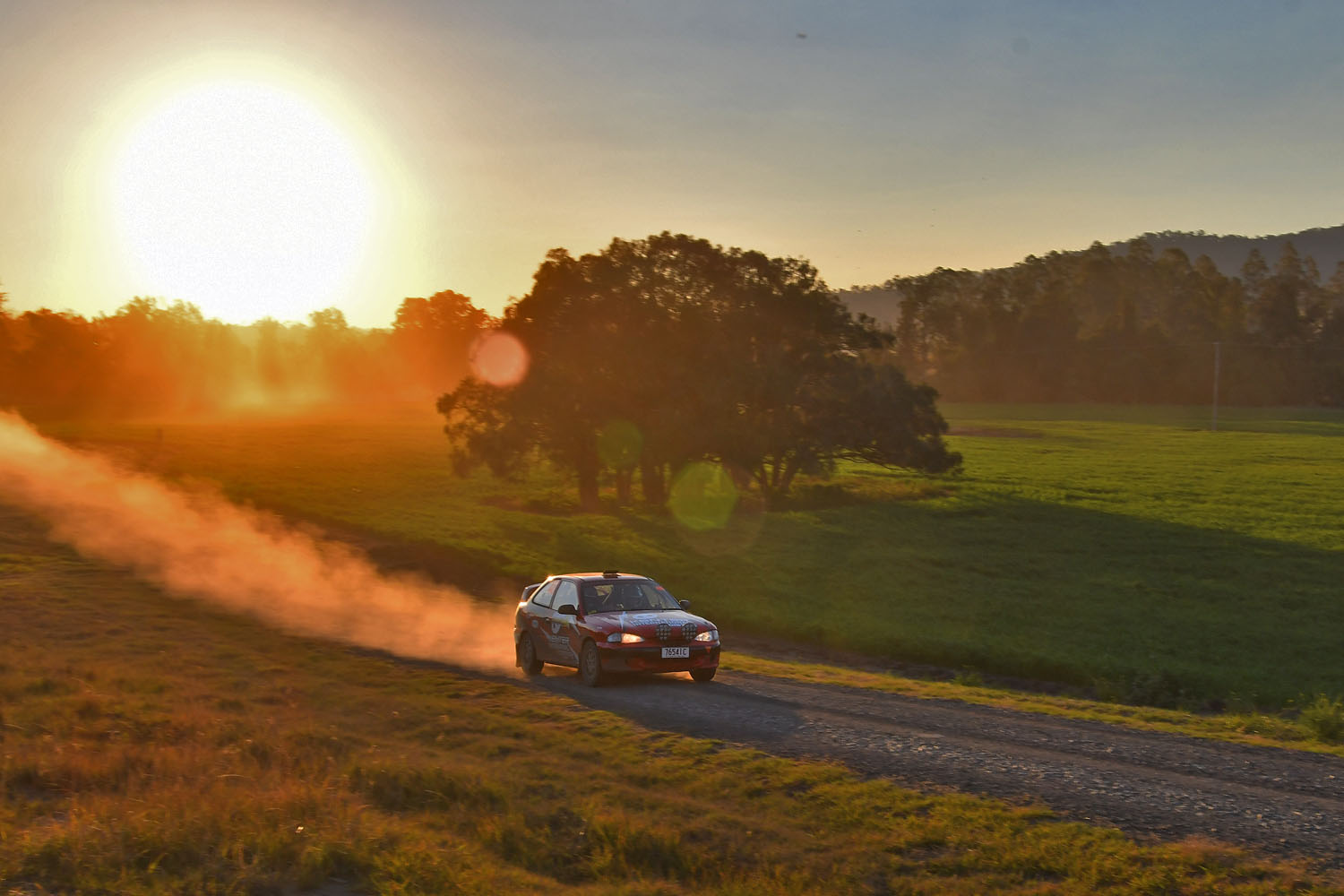