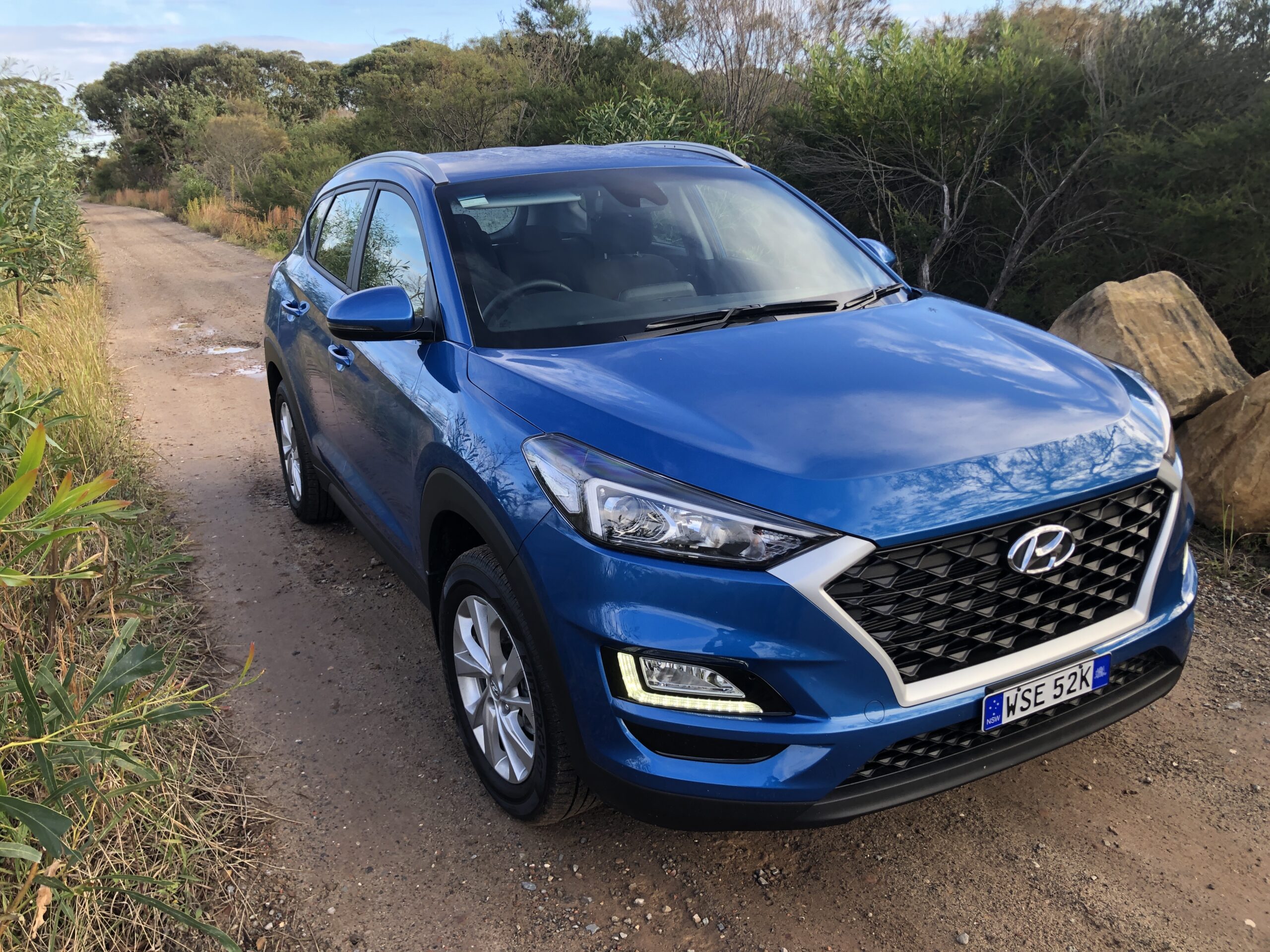 At some point in our evolutionary history our DNA was corrupted and as a race we decided that SUVs were a better proposition for personal transport than small hatches or wagons.

It must have been a quirk of evolution, because, if you apply logic, there could be no reason why we would swap smaller more efficient cars with ones that are heavier, offer no more space internally and have a higher centre of gravity and frontal profile giving less aerodynamic efficiency and dynamic stability, but that seems to be what has happened.

Sure there’s still plenty of small hatches sold, but compact wagons have all but disappeared in favour of the almost ubiquitous Sport Utility Vehicle or SUV, and every car maker on the planet has clamoured to offer them to car buyers. The irony is most SUVs aren’t very sporty nor do they offer much extra utility over a hatch or wagon. Just sayin’!

You might have guessed that this writer is not a huge SUV fan, and you are right. Give me a lithe, low profile, wagon, sedan or hatch any day of the week, they handle better, they stop better and they use less of the planet’s resources in getting places. But what would we know?

So it was that we climbed aboard the latest version of Hyundai’s Tucson Activ, the test car being a front drive version of the model. There is also an all-wheel drive version and a range of trim and engine options across the range.

The Active is powered by a normally aspirated 2.0litre four-cylinder twin cam petrol engine which does a reasonable job of pushing the Tucson along, although the more powerful turbo 1.6 litre petrol engine available in the AWD Tucsons would be a better fit in many ways.

The non turbo 2.0-litre delivers 122kW of power and 205 Nm of torque which is sufficient, but not overly abundant, and at times it does struggle. Maximum torque is made well up the rev range at 4000rpm, so don’t expect a hard lugging donk that pushes you back in the seat on take off. It has to be revved, and when you pile the luggage and passengers in it does need to be rowed along to deliver reasonable performance.

It’s mated to a traditional torque converter six-speed auto and while the engine and transmission works fine it does nothing special, it’s OK but generally unremarkable. It’s inoffensive, but largely uninspiring

During our week with the Tucson Active we covered mostly suburban and city driving, with a short excursion into some rural areas on Sydney’s fringe, where we got to try the front drive Hyundai on some relatively smooth gravel roads.

It handled city driving fine, rolling along in urban traffic with little fuss. At cruise speed on the highway or motorway the Tucson travels nicely, it is quiet, smooth and boasts comfortable and well controlled ride.

Head off on to well-made gravel roads and it still works OK, but don’t let the fact that it is an SUV fool you into thinking you are in an off road vehicle. When the going gets rough, turn the Tucson around and head back to the smooth stuff would be our advice.

Back on the blacktop the Active 2.0litre does the job, and during our time with it we averaged just over 9.4 L/100km fuel consumption, which for a compact SUV isn’t all that frugal in our eyes. Hyundai claims a combined average of 7.9L/100km and 11.0L/100km in urban running, which is not all that economical for a compact SUV, but underlines our arguments in favour of lighter and lower profile cars.

Inside the cabin its neat and tidy but again, generally uninspiring with a colour palette of mid greys and blacks abounding. The interior is neatly trimmed and well laid out, but this is as mid-level vehicle and the fit out meets that expectation, it is mid-level and average.

The Active features a 7.0 inch centre Infotainment screen, which is slightly smaller and lacking some of the features of the more expensive Active X variant.

The Active’s system boasts AM/FM radio, but no DAB digital radio tuner, like most other new cars of this ilk. It does however get Apple Carplay and Android Auto, and the near obligatory Bluetooth connectivity, however it lacks Sat Nav, which is no great problem because with Carplay and Android, Google maps can be accessed from your phone, which tends to be easier and more intuitive to use. If you do want DAB or SatNav you will need to pay the $3000 extra for the X model and its 8.0 inch screen.

Controls, instruments and the infotainment screen are easy to read and use with good illumination at night and are easy reading in daylight as well.
Again, there is nothing offensive about the interior, the seats are good, they’re comfortable and offer strong support and everything in the cabin generally falls easily to hand. However there is little to help the Tucson Active stand out in a crowded compact SUV market. 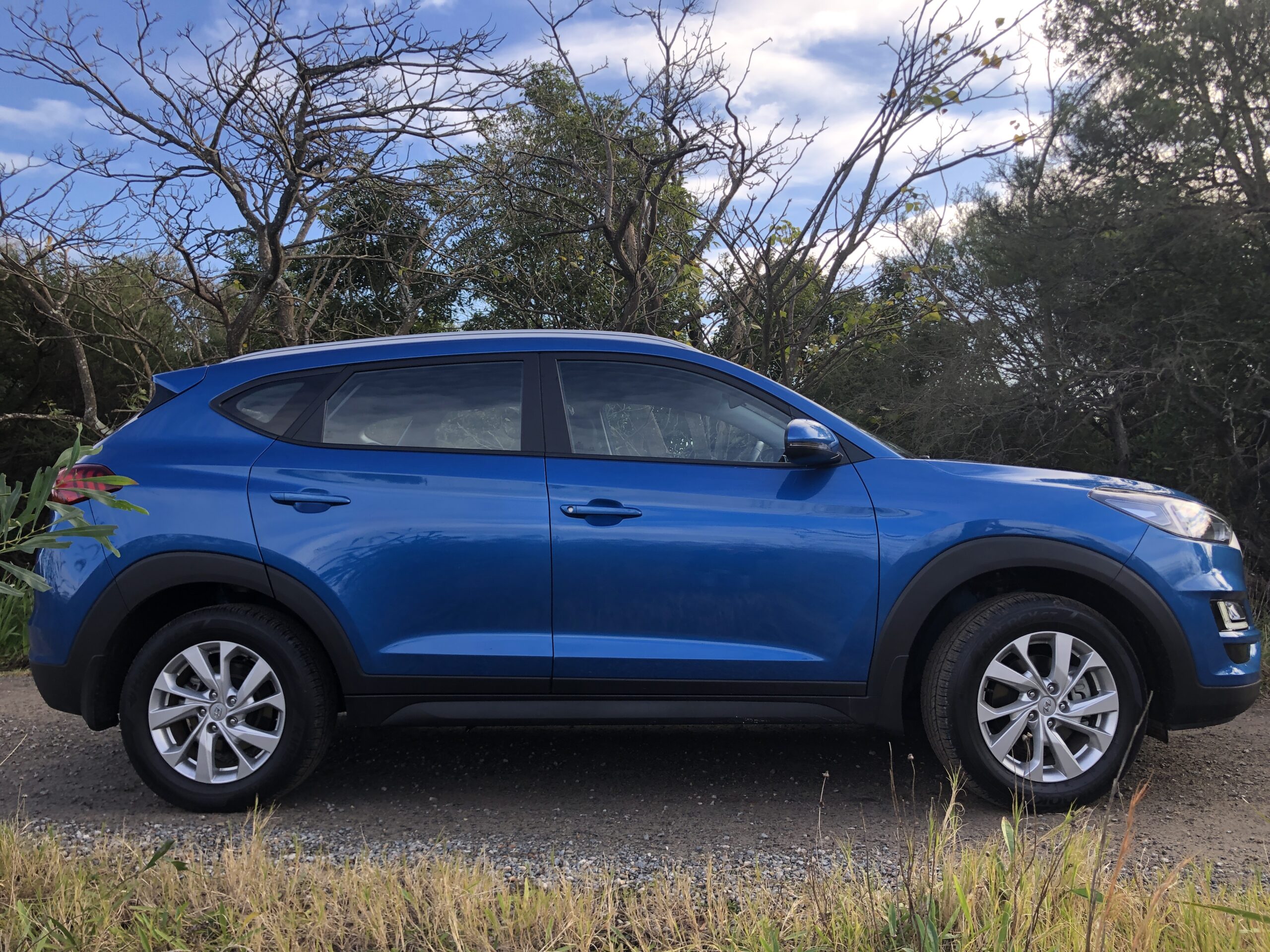 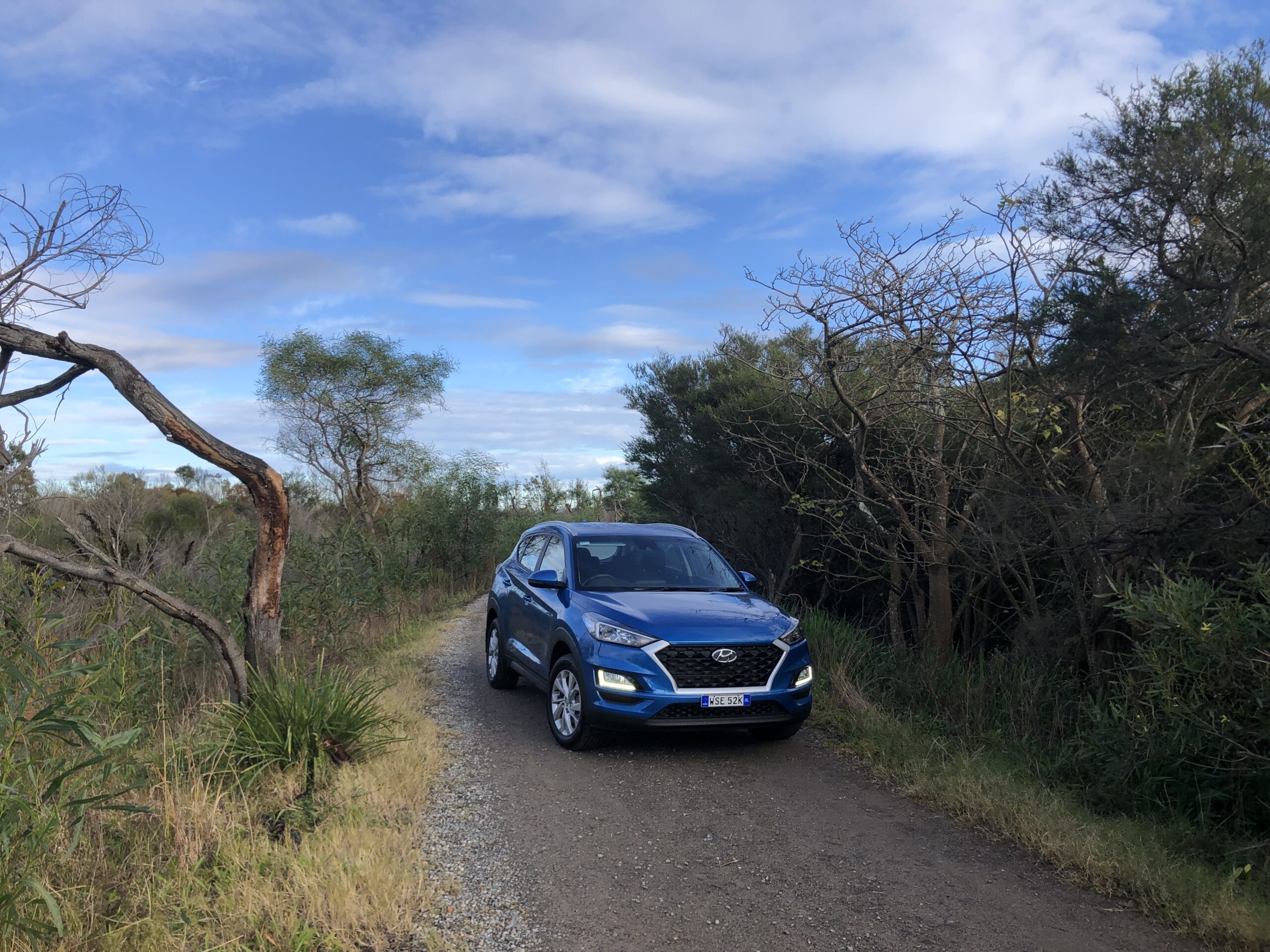 Inside, space wise the Tucson offers good head room and acceptable leg room for decent adult-size comfort, while cargo space in the rear luggage area, is comparable with other offerings in the sector of the SUV sector. The luggage area boasts 488 litres. The load area is wide and easily accessed so the space is very usable and features tie-down points and a nice flat floor. It features a 40:60 split-fold rear seat that allows you to expand the load area to a convenient 1478 litres with the seats stowed. Thankfully the flat floor hides a full size spare wheel, unlike some other SUVs. How car makers think you can travel this challenging country in an SUV without a full size spare, is almost beyond comprehension.

In terms of safety the Active does get a suite of active safety technology packaged up in Hyundai’s Forward Collision Avoidance Assist technology. This gives you lane-keep assistance, guided reversing camera and rear parking sensors and a base level AEB systems using a camera-based system that functions at urban speed.

Hyundai gives its standard five-year/unlimited-kilometre warranty on the Tucson and also offers a range of pre-paid servicing packages for the car’s 12-month/15,000km intervals. While fuel consumption may be a bit high for an SUV like this the overall cost of ownership should be pretty reasonable.

At an rrp of $30,990 drive-away the Hyundai Tucson Active represents pretty strong value without troubling the automotive excitement meter.
If convenient, cost effective and trouble free motoring in a small SUV package is what you are after, and you’re not seeking pizzazz, neck snapping performance or any admiring glances from other motorists, then the Tucson Active may well be might be the motor for you.

As we say, the Tucson does everything it needs to do and does nothing badly, but it does nothing exceptionally either. It is inoffensive, if bland, but will deliver you where you need to go at a reasonable price, with reliability and dependability and strong back up from the manufacturer. It is just not our cup of tea. 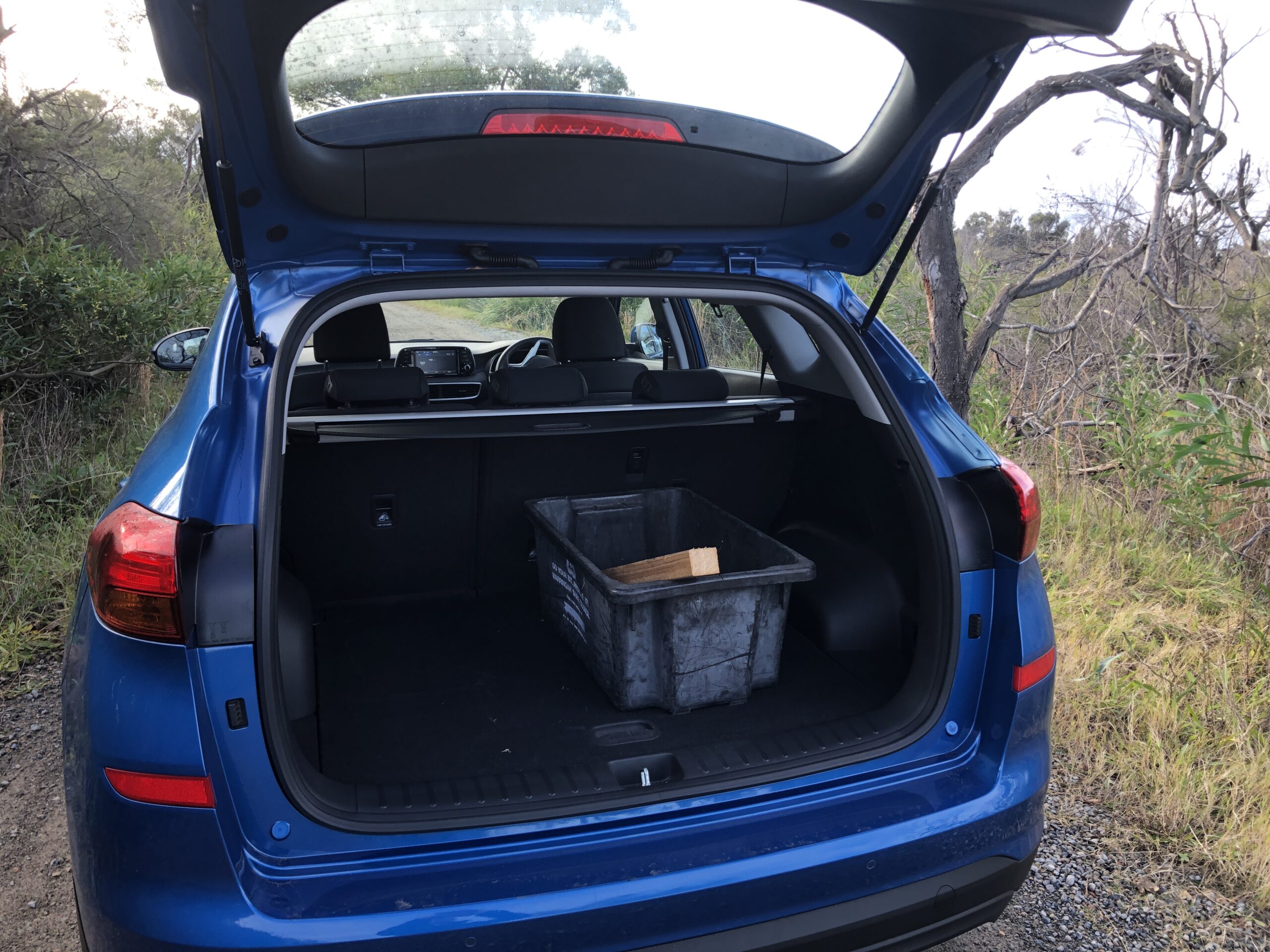 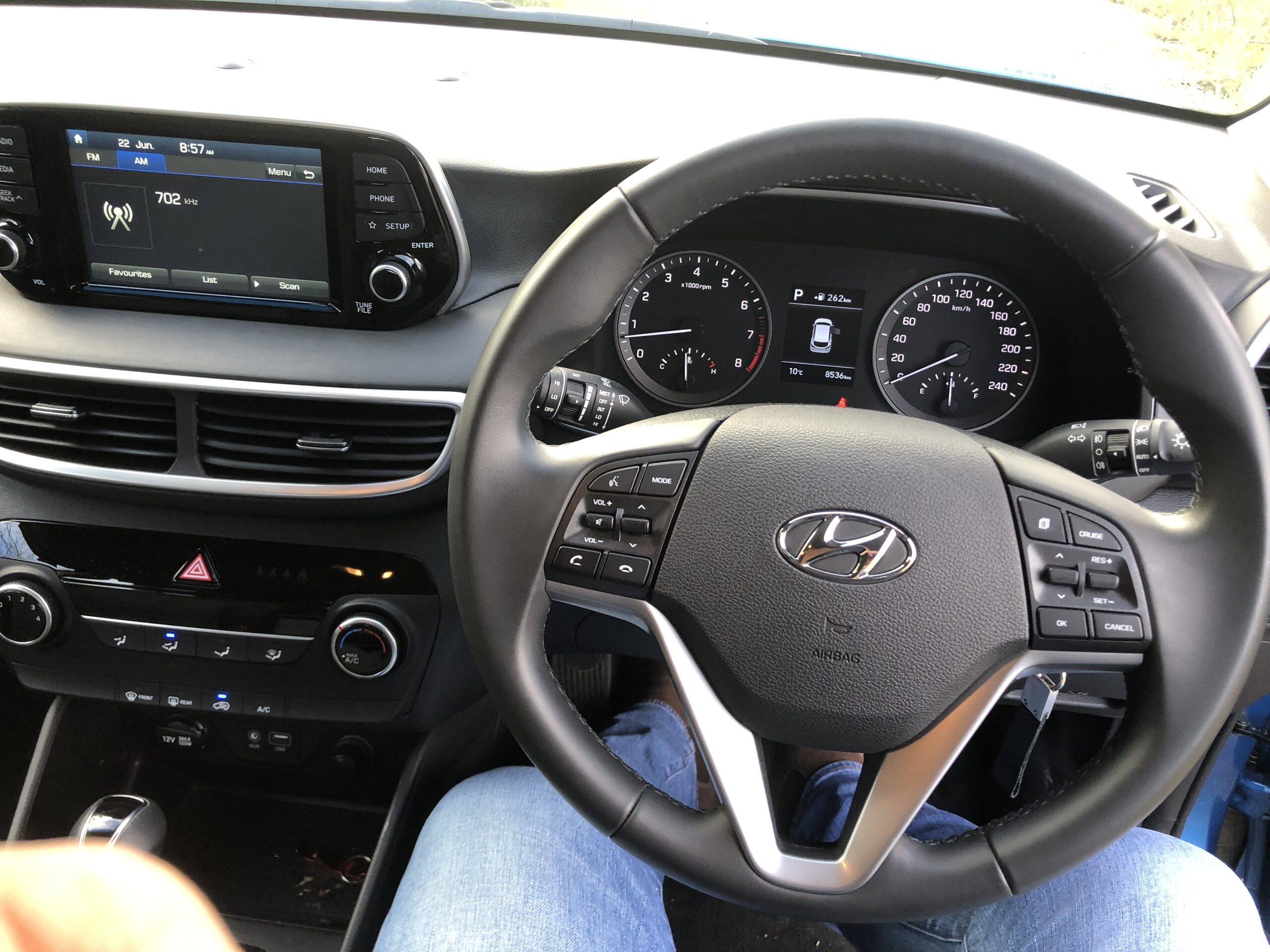